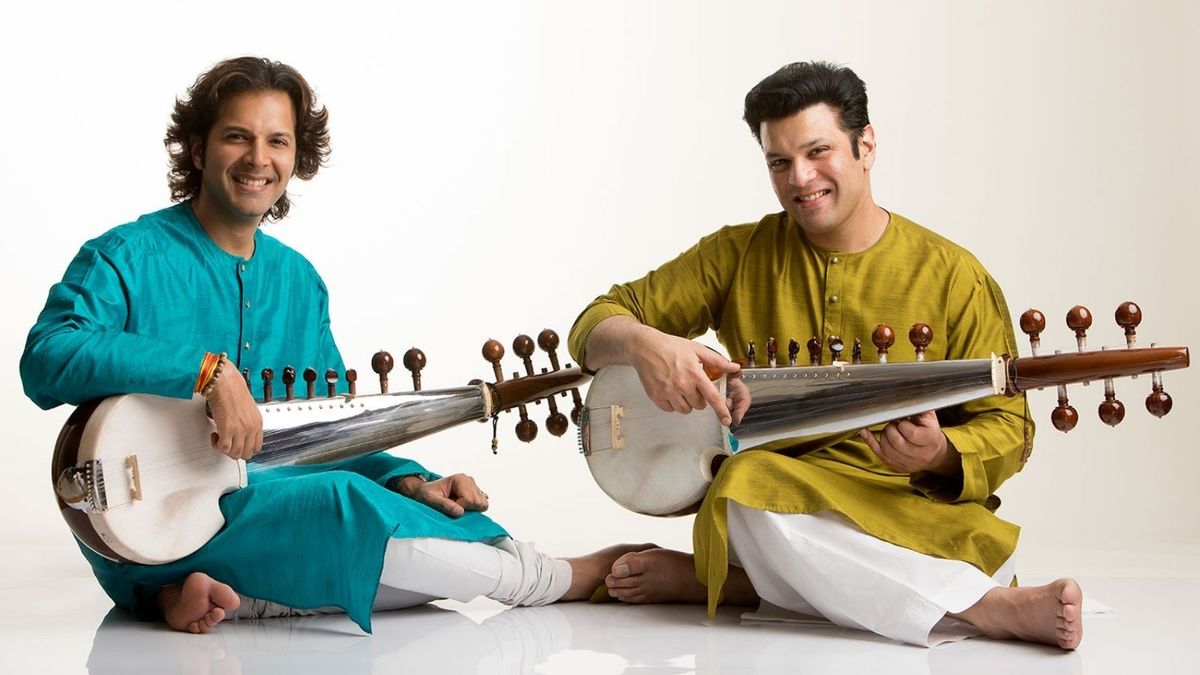 Taking the legacy of their illustrious father ahead, Amaan and Ayaan Ali Bangash are making the sarod contemporary—even as they ensure they do not lose sight of tradition. The brothers, who perform both as partners and solo, have to their credit several stage performances and collaborations which include American folk singer Carrie Newcomer, Indian-American musician Karsh Kale, Grammy-nominated violinist Elmira Darvarova, Joe Welsh, and most recently Nobel Peace Laureate Kailash Satyarthi. The brothers believe that music is the biggest wealth that they have inherited and are making sure they take this forward to the next generation through their compositions that are rooted in tradition and yet strike a chord with the younger audiences.

Recently the duo was in Bengaluru as part of The Leela Palaces, Hotels and Resorts latest initiative, ‘Icons of India by The Leela’. Before their private concert at The Leela Palace Bengaluru, Amaan and Ayaan Ali Bangash sat down with Zee Zest for this exclusive tête-à-tête.

1. Inheriting the musical legacy of Ustad Amjad Ali Khan, what role has music played in your life?

Amaan: I think before we knew what we were expected to do, we were already in it. We were lucky to have our father as a teacher and that's a big blessing. And God's been kind that we didn't have to go through the struggle many people go through. Having said that expectations are much higher, which is fair enough. It should be—we have been working very hard and it's a long journey.

Ayaan: Music has made us better human beings; it keeps you humble and grounded because you can't take yourself seriously. Also, the environment the child grows up in makes all the difference and when my father was travelling, our mother was our first Guru.

2. What kind of pressure did you face being the sons of Ustadji?

Amaan: While I will not use the word scrutiny, we knew that we will be judged. Everything was given to us on a platter and by God’s grace whatever we have achieved may have taken much longer otherwise. You must accept and acknowledge the truth. But having said that—you have this, but what can you do with it? All we can do is hard work and not cheat. If you don't practice for one day, your teacher knows it and the audience knows. Music cannot lie.

Ayaan: There is pressure as there is good competition. As our father says, the biggest competitor is not somebody who's better than you, but somebody who is humbler. We have not taken any opportunity for granted. Also, we feel criticism is the biggest honour because people expect more if you are relevant.

3. How has the pandemic affected your music?

Ayaan: There is a positive and a negative side to it. The positive is that everyone is doing well in the family. The other frustrating part is that we have lost two years of our father’s career and for us as well, as we had some great lineups happening internationally. This was the time to introspect, to know our negatives and focus on what we needed to work on. This time has not been easy for artists. But the silver lining was that we could spend time with our family.

4. How do both of you collaborate with each other to create music?

Ayaan: Your music reflects who you are as a person. Whenever you are collaborating or performing with anyone it is important to know each other's nature and temperament, and collectively try to make a flower bouquet. You must be in a happy place when you are on stage as Indian classical music is deeply connected to spirituality.

5. How was your collaboration with Joe Welsh for your EP Prayers?

Amaan: That collaboration was initially between my father and him, and it so happened that while we were touring in the USA and he very sweetly asked both of us to come on board. It was an honour for us to be with two iconic legends on the same platform and same space. What we really like about the western classical industry is that they don't take themselves seriously. They hear more than they deliver, and that project has been received very well. We finished recording at a time when the lockdown was announced, and the proceeds are going to a foundation that is helping doctors and frontline workers. (Listen to one of the tracks from Prayers below)

6. How was your recent live concert in the US after almost two years?

Ayaan: We were committed to the shows before the pandemic, and we had to honour them—by God’s grace they went very well.  It's quite something to see a masked audience but perhaps that is just the world we live in. It's all happening, gradually, and we hope that the worst is behind us.

7. As young classical musicians, do you feel there is an increased interest in the traditional forms of music today?

Amaan: Everything has its own journey. It's not the genre that's stagnating, but the performers who are unable to take it forward. Also, every genre is changing with time and the artists are reinventing themselves. Back in the 80s, our father started playing short pieces for which he was initially criticised—but today it's the need of the hour. There is no rulebook—every era has had its own way of representing classical music.

8 Ways To De-stress With Music Therapy At Home

8. Tell us about your album

Ayaan: We have worked with Kailash Satyarthi's foundation for a campaign called ‘Justice For Every Child.’ We hope we can make a difference by creating awareness for this foundation because they are doing amazing work and we want to contribute to that.

9. Aayan, can you tell us about your twins’ (Zohaan and Abeer) maiden sarod track, Our Love?

Honestly, it could happen because of the lockdown and by September, I felt we could give my father a surprise on his birthday in October. We recorded at home and then the files were sent to a programmer in Chennai and thanks to technology it was a great surprise for my father. But I think it's very important to always know that you're not the first or the last and you are only a humble custodian of the legacy you have.

10. What are your future plans?

You have plans but sometimes they don't work out. We are more spontaneous as people and things happen instinctively. In a musician's life planning really does not work. And when your plan does not work, you are a part of God's plan so that is a good thing.

7 Dance And Music Festivals You Must Attend This December

Manike Mage Hithe Has Shown How Music Can Bring People Together: Yohani

A Journey Through The Vibrant Soundscape Of Western Rajasthan

Will The Real Gully Girl Please Stand Up!